A great selection of apartment hotels!

Book your apartment hotel in Moscow!

Find the best price for your aparthotel! 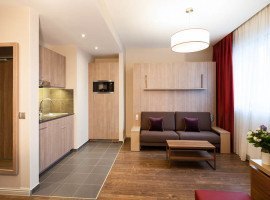 Moscow is the capital of Russia and by far the city with the most political and economic importance in Russia. 12.1 million inhabitants live in Moscow and make it the biggest city in Russia, the most populous city in Europe and thus, one of the biggest cities in the world. The city is located on the river Moskva and is known for its superb architecture.

The importance of Moscow throughout Russia and Europe is demonstrated by its extensive transit network. Moscow has four international airports, nine railway terminals and the fourth largest metro system in the world. Its political importance is shown but the seat of the Russian government in the Kremlin. The Kremlin and the adjacent Red Square are also world heritage sights.

Due to Moscow’s size it is also the most important economic city in Russia. Various industries (e.g. software, chemical, energy production, food, etc.) are prominent in the city.

Sightseeing in close vicinity to the apartment hotels in Moscow

Sightseeing in Moscow can be a bit tricky. Due to the city’s extension long distances have to be covered to see the best sights. But when you stay in one of our apartment hotels in Moscow you will realize that it is definitely worth the effort. The Kremlin is the political center of Russia and combines superb architecture with a lot of history. The famous red square is another important touristical sight in Moscow. The square transports a lot of historical moments and guests in our apartment hotels in Moscow will have the opportunity to soak up Russia’s intriguing and turbulent past. The Russian Orthodox Church is also of prime importance in Moscow. Lots of Cathedral and Monasteries, such as the St. Basil’s Cathedral or the Novopassky Monastery, were built and are part of Moscow’s landmarks today.

Apart from its impressive buildings Moscow is also known to our guests in the apartment hotels for its extensive parks. More than 100 parks are located in Moscow and offer the opportunity to take a break and relax in a green environment. You will also see lots of business travelers spending their lunch break in the parks on one of the sunny days in Moscow. Many of these parks also have a historical background. For example, the Izmailovsky Park was home to Peter the Great, one of the czars of Russia.

Moscow is Russia’s capital and biggest city and one of the biggest cities in Europe. That’s why Moscow also has a great economic importance. Business travelers staying in our apartment hotels in Moscow will therefore find themselves in a very business-minded city. The economy in Moscow grows by a significant 10 per cent annually, which emphasizes Moscow’s role as the business engine in Russia. Due to its characteristics, foreign investments made in companies from Moscow rarely happen. To do business in Russia successfully you have to know the Russian language and the Russian culture. If business travelers in our apartment hotels in Moscow are able to do so, they’ll provide themselves with a competitive edge over others. In Moscow especially financial services and commerce play a big role.

Image: The Kremlin in Moscow

Even though you can cook your favorite meal in one of the apartment hotels in Moscow, we know for a fact that many of our customers are also interested in eating out in Moscow after a long day of work or sightseeing. Moscow’s restaurants have a lot to offer. You can discover regional as well as international cuisine. We have some recommendations for you:

The Ragout Restaurant is centrally located next to Belorussky train station. They serve tasty local dishes and offer a business lunch for 12€. We really like the stylish interior and free WiFi makes you hang out a little longer than usually.

If you want to get your ingredients for a home-made meal in your apartment hotel in Moscow, you can visit one of the numerous supermarkets in Moscow. You’ll find anything you are looking for there. If you want to get fresh ingredients, then go to one of the numerous markets, which are spread around the city. You can check them all out on the website of The Moscovore! We also list the best market:

The Cheremushkinskiy Market is located close to Universitet metro station. On this market you will find lots of Russian specialties. Therefore, guests in our apartment hotels in Moscow who want to experience new tastes will enjoy going to this market.

We know for a fact that many guests in our apartment hotels in Moscow are very eager in discovering the city of Moscow in an efficient manner. Moscow is huge and thus, it is kind of hard to see everything. In order to see as many sights as possible, we have listed the most important activities to do sightseeing in Moscow.

Moscow has a lot of famous sights to see. If you want to discover them with a guided tour you can even do that for free. We think that this is the best way to experience Moscow in an authentic manner. The tour received great feedback from guests staying in our apartment hotels in Moscow. Click here to book your tour for free.

The Afi Mall is not only home to many shops and stores to do shopping. Guests of our apartment hotels in Moscow can also visit the observation deck on the top of it. Moscow City differs from other parts of Moscow, such as the Red Square, in that it is more modern and full of skyscrapers. We highly recommend to go there, as you will have an extraordinary view on the skyscrapers.